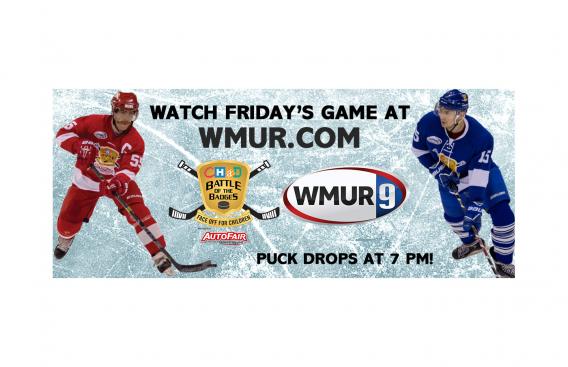 LEBANON, NH - Due to public health concerns around COVID-19, and out of an abundance of caution, Dartmouth-Hitchcock Health has decided to modify the format of the 13th annual Battle of the Badges ice hockey game to benefit Children’s Hospital at Dartmouth-Hitchcock (CHaD), scheduled to take place Friday, March 13 at 7:00 p.m., at SNHU Arena in Manchester, NH.

The annual championship game between Team Fire and Team Police will go on as planned, but spectators, including players’ families, volunteers and others, will not be allowed in the arena. The game will instead be live-streamed by WMUR on their website at WMUR.com and on the WMUR mobile app.

Dartmouth-Hitchcock Health implemented guidelines earlier this week limiting internal and organization-sponsored meetings and events to 50 people or fewer, based on Centers for Disease Control (CDC) recommendations on social distancing to help contain the spread of COVID-19 in the United States.

Organizers of the Battle of the Badges event have been closely monitoring the situation and communicating with local and state officials, and considered various options before ultimately deciding to reconfigure this year’s event, which was expected to draw nearly 6,500 spectators and event participants, including patients of CHaD and their families and first responders from across the state. Event organizers proactively communicated with all those involved once they arrived at this decision.

“The Battle of the Badges is a wonderful event that rallies the entire state around our mission of providing compassionate care, family resources and advocacy for CHaD kids and their families, and we did not take the decision to shift the format of this year’s event lightly,” said Joanne M. Conroy, MD, CEO and President, Dartmouth-Hitchcock Health. “We appreciate the dedication, time, effort and generosity of the hundreds of individuals who make the game possible, the fans who purchase tickets to support their teams, CHaD staff and our event partners at SNHU Arena and WMUR. We also appreciate their understanding in the interest of safeguarding public health. We know the teams will bring the same excitement and rivalry to their game, and we hope the many fans will watch and cheer-on their teams from home as they stream on WMUR.com.”

This change to Battle of the Badges follows on the heels of similar modifications of other spectator events, including the Eastern College Athletic Conference ice hockey quarterfinal game between Harvard and RIT, which will be played without spectators.

The Battle of the Badges ice hockey game to benefit CHaD will be played Friday, March 13 at 7:00 p.m., and will be live-streamed by WMUR on WMUR.com and on the WMUR mobile app. Those who hold tickets to Friday’s game may redeem their tickets to attend the 2020 Battle of the Badges Baseball Classic on Friday, July 31, 6:30 p.m. at Northeast Delta Dental Stadium in Manchester. More information will follow about how to exchange tickets.

For additional information about Battle of the Badges and to obtain regular updates about D-HH’s COVID-19 response visit www.dartmouth-hitchcock.org and https://www.facebook.com/DartmouthHitchcock.

Dartmouth-Hitchcock Health (D-H Health) is a non-profit academic health system primarily serving New Hampshire and Vermont as well as patients from across New England. As the largest health care system and employer in New Hampshire, D-H Health is an integrated health care delivery network of providers and member organizations with the same commitment to provide the highest quality of care to the nearly 2 million community members we serve throughout the region.