Thousands tune in to modified CHaD Battle of the Badges 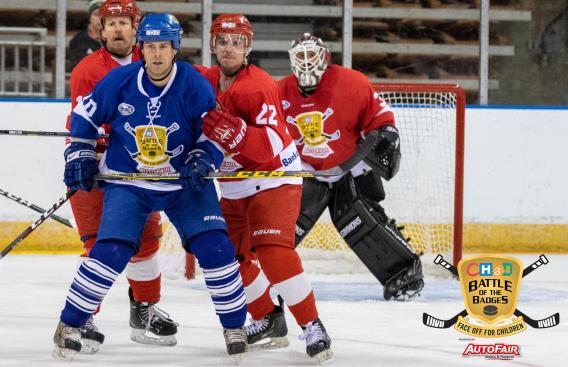 After a whirlwind week, thousands of CHaD supporters tuned in to watch and donate to a reimagined CHaD Battle of the Badges Hockey Championship on Friday, March 13. With the threat of coronavirus forcing the game to be played behind closed doors, Team Fire skated away with a 9-4 victory as over 12,000 viewers watched the game on WMUR.com.

The decision to remove fans from the 13th edition of the game came on Tuesday, March 10, forcing a modification of the traditional Badges experience. Instead of rooting from the arena, fans instead watched the game on a live stream thanks to WMUR. With Jamie Staton, WMUR’s sports director and weekday sports anchor, calling the play-by-play, this new experience allowed for an international audience while also providing every Children’s Hospital at Dartmouth-Hitchcock (CHaD kid)—all 85,000 of them each year—the chance to watch the game at the same time. And for the very first time ever, children who were receiving care at CHaD in Lebanon could catch the game from their rooms for the first time ever.

For those fans rooting for Team Fire—international and local—they were treated to an early goal as former Manchester Monarch Ashton Rome (Salem Fire) scored on a breakaway less than 90 seconds into the game. A rally by Jake Paulsen (Candia) made it 2-0 Fire midway through the first period. From there, the men in red would never trail building 3-1 and 6-4 leads before a flurry of goals capped it in the third period.

On the fundraising side, the move behind closed doors had an impact on the game’s total, but it was partly mitigated by the generosity of the thousands watching online. Over $10,000 was donated during the stream of the game, and over $15,000 total has been generated through donations and merchandise sales at CHaDHockey.org.

Team Police was the top fundraising team led by Kyle Daly (Manchester PD), who raised over $27,000. He became just the second player to surpass $100,000 in individual fundraising in game history, taking just five years to do so. Team Fire was led by Michael Snide with nearly $9,000 raised. In total, $195,000 and counting has been raised by this year’s game, leaving it within striking distance of $3 million heading into 2021.

Dozens of sponsors play a vital role in the fundraising success each year, starting with the presenting partner, AutoFair. CHaD would also like to thank this year’s team partners—Bank of America (Team Fire) and MetroWalls (Team Police). Service Credit Union’s generosity provided cowbells for the first 500 fans, which will now be handed out at the 2021 game. Eastern Propane & Oil served as the presenting partner of the CHaD ambassador program for Hockey while PhRMA signed on to support the volunteer efforts. Additional thanks are reserved for Coca-Cola Beverages Northeast, Comcast, Eversource Energy, and Morgan Stanley & Michael Judd.

For fans who purchased tickets to the hockey game, CHaD is offering the opportunity to exchange those tickets for a ticket to the CHaD Battle of the Badges Baseball Classic this summer. For more information, fans can contact CHaDHockey@hitchcock.org.

Photos of the game are available on the Badges Facebook page.

Thousands tune in to modified CHaD Battle of the Badges